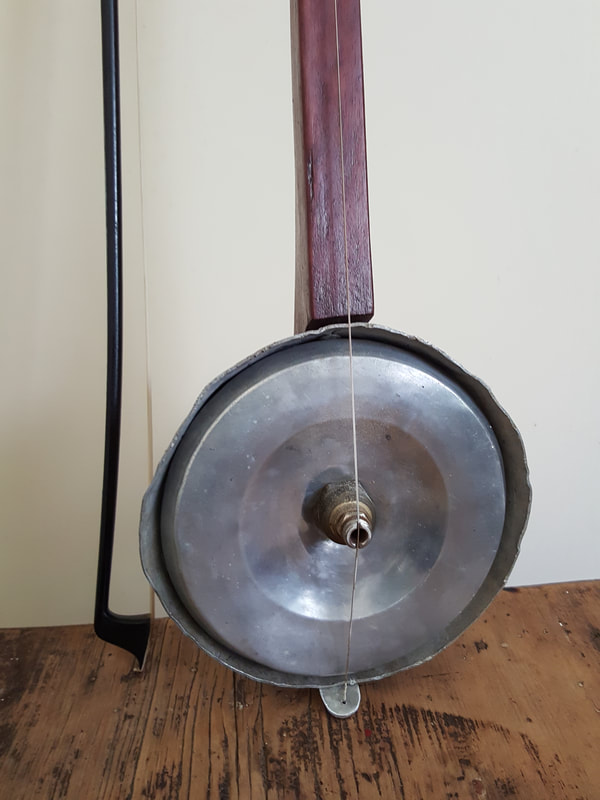 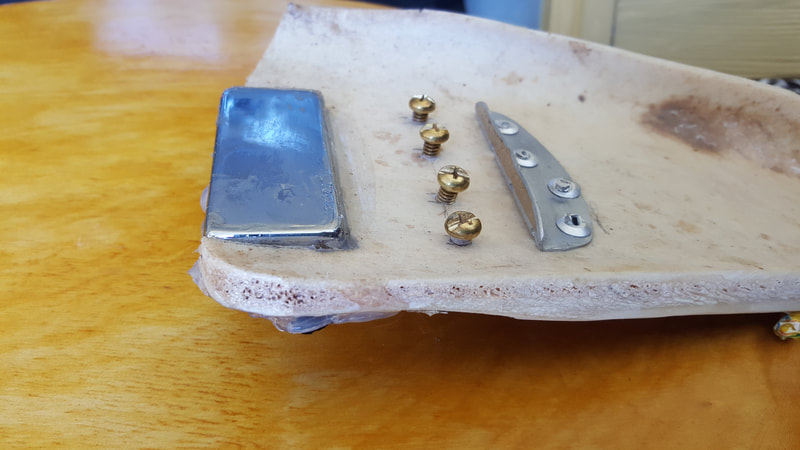 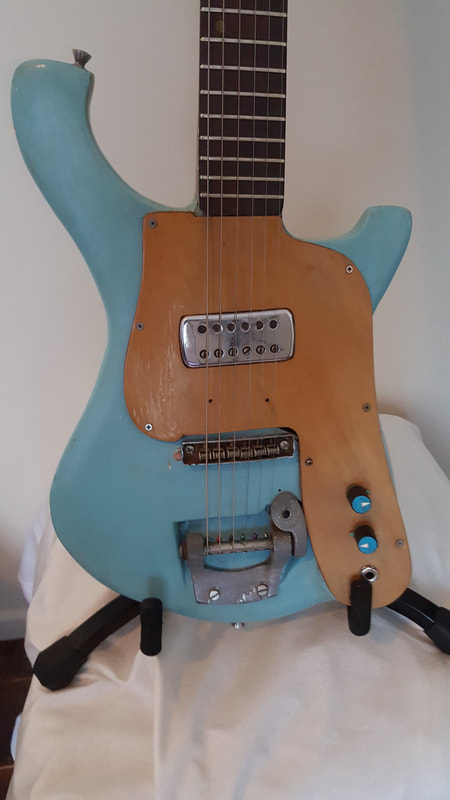 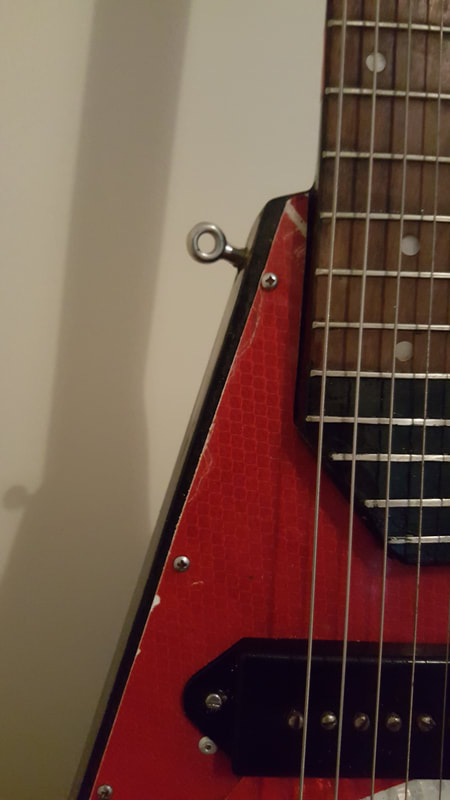 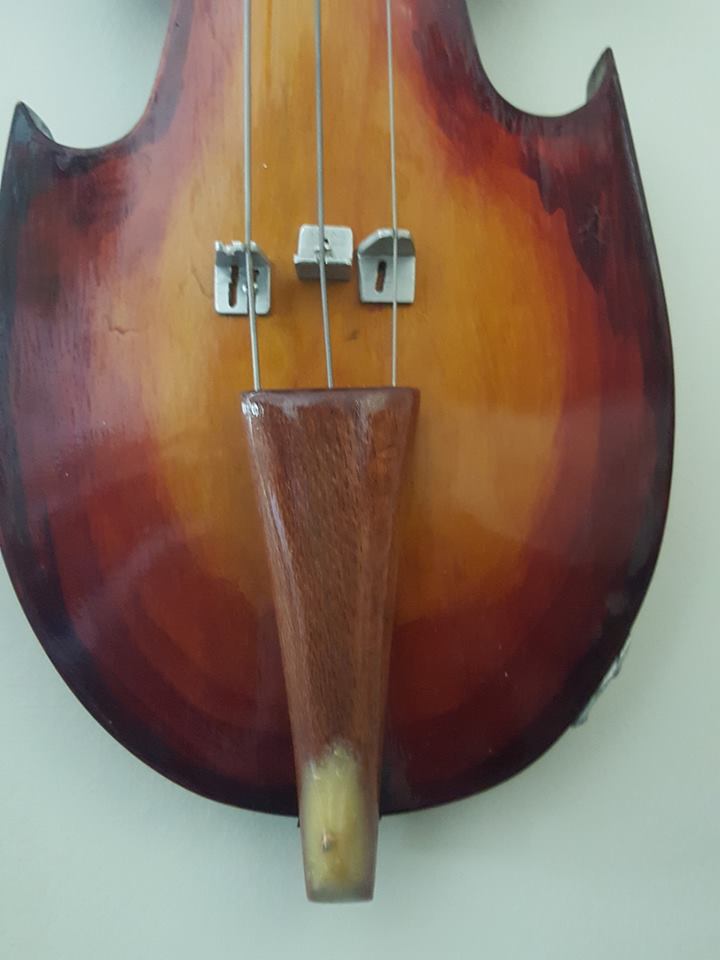 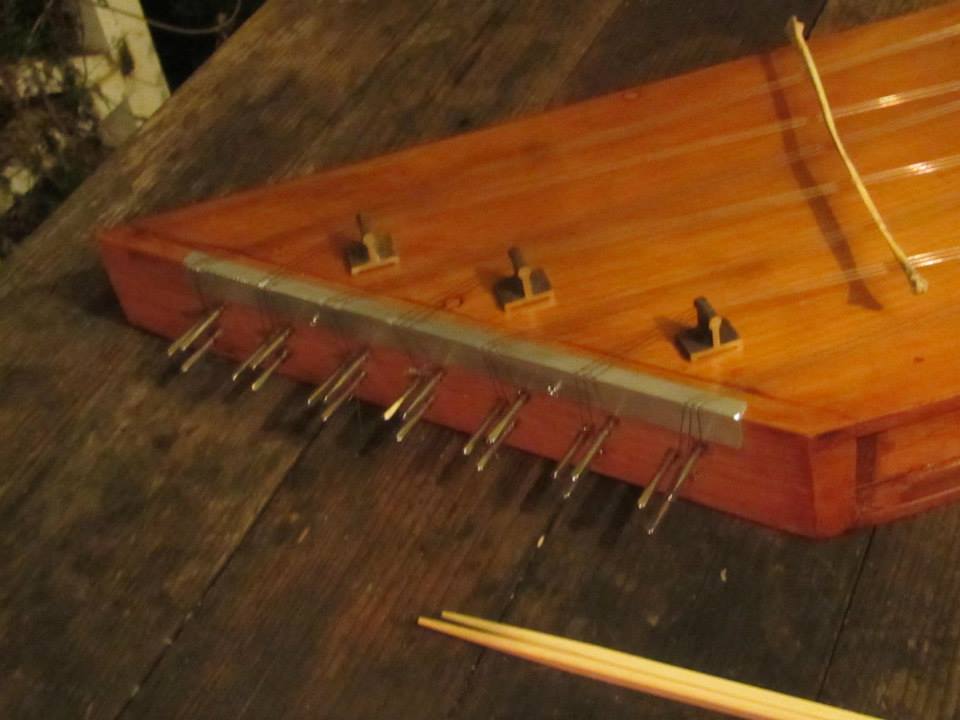 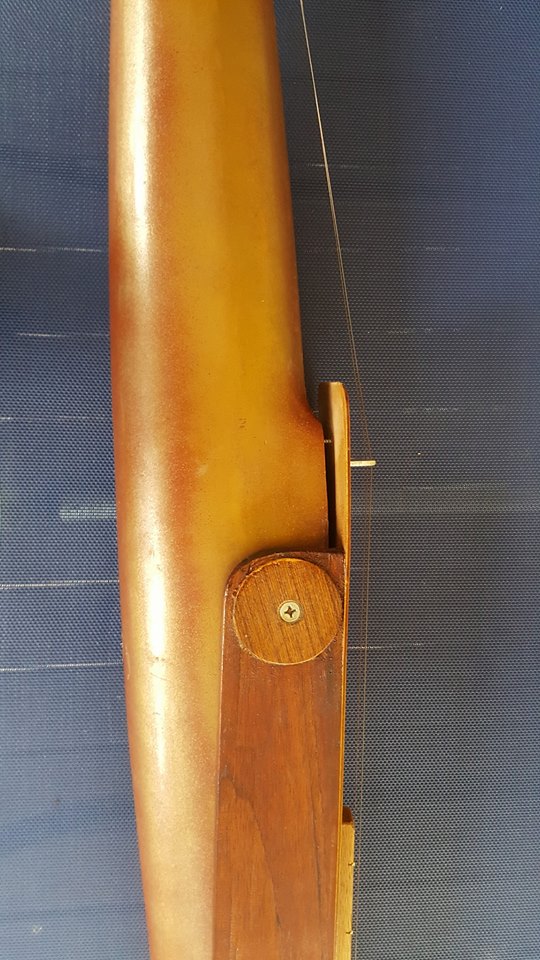 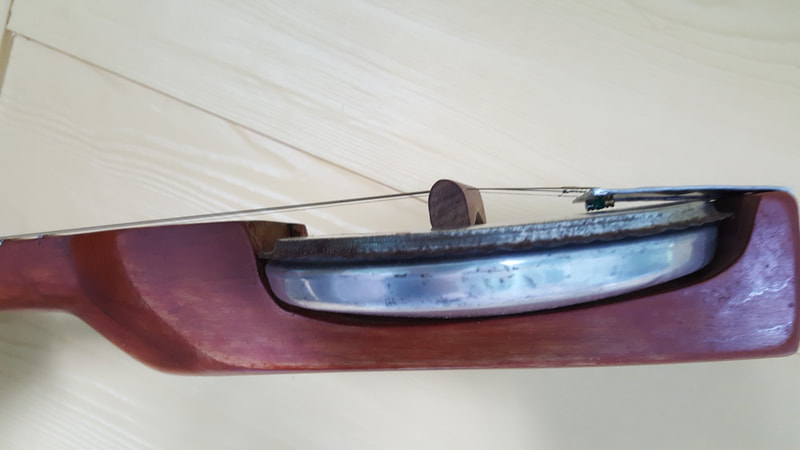 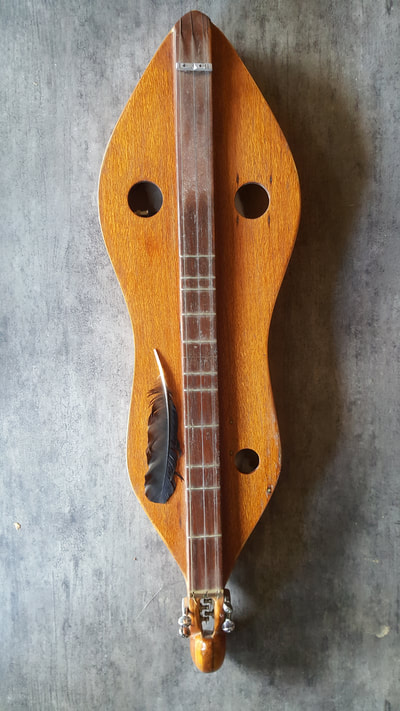 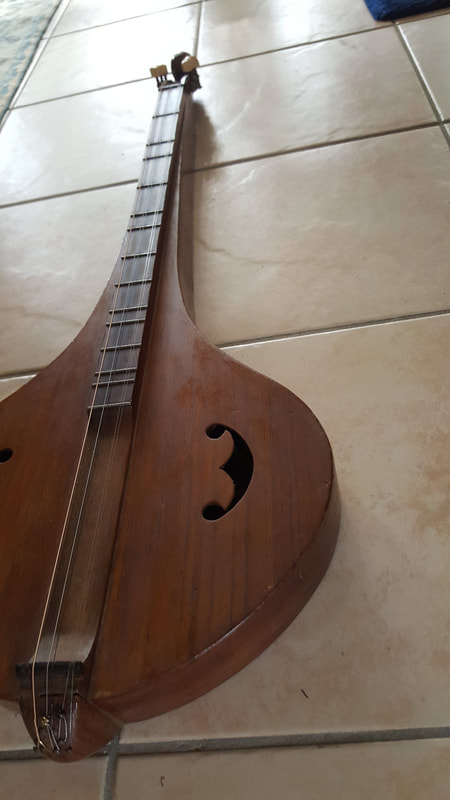 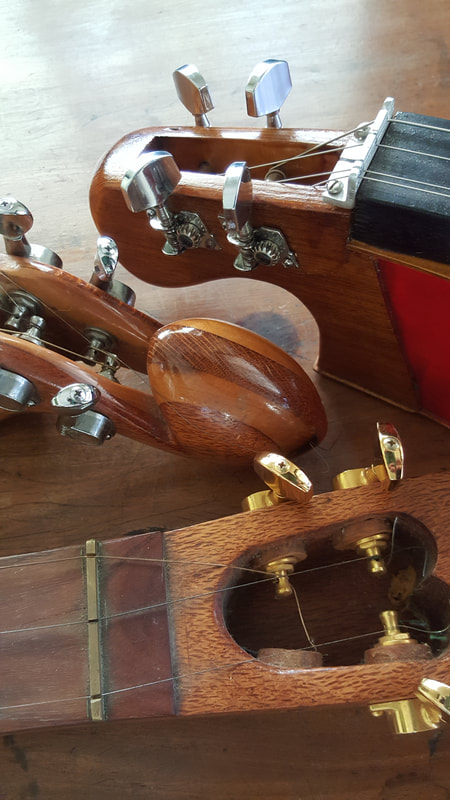 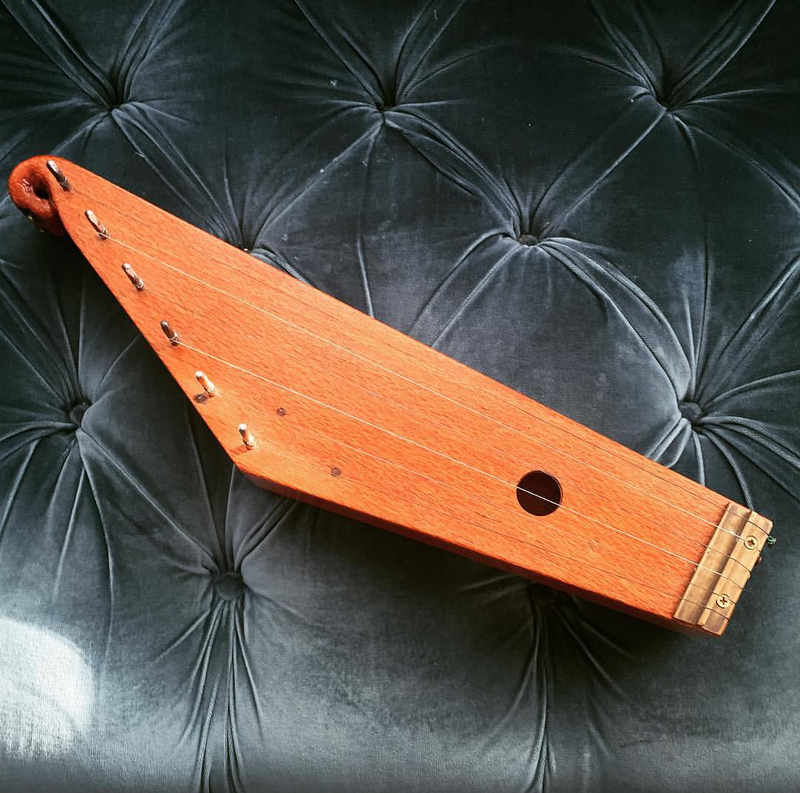 CUSTOM  INSTRUMENTS
I have been hand-making instruments all my musical life. They are made with a specific sound inmind and are all one-off pieces.  My own are not for sale, but yours can be custom made, according to the kindof sound and style of instrument you are after. These are "folk" instruments, at once naive, but not. Made from whatever materials come to hand,  I build with a very limited array of tools - jigsaw, hand planer, sanding block and a grinder. My design approach is back to front by traditional standards. I build to generate new songs. Every instrument contains at least one song. Sometimes I start with a sound I am hearing in my head, though often the result is unexpected. Or else, they are just a product​ of experimentation. Mostly they are works in progress. My blue electric guitar for example has been ​modified over 40 years.
WORKSHOP DULCIMER JAM

Participants learn to play the Appalachian Mountain dulcimer, from basic understanding of its modal fretting to playing in ensemble on a brace of Datson’s hand crafted instruments. Max of 8 places for beginners without an instrument. All dulcimer players with instruments welcome. From age 12 upwards.
INFO & WORKSHOP BOOKINGS
I began my music making on an Appalacian mountain dulcimer. I sold it to buy an electric guitar when punk music arrived. The DIY punk ethic went in deep.

In Sydney surf punk band, Surf Side Six, I was part of the inner city live music scene in the seventes. My next band was Samurai Trash, one of the first Australian bands to sign to the brand new Virgin Label in 1984. Music from my early career in bands Belle du Jour and Surfside Six have recently been released in compilation albums. Our Surfside Six hit song,'Cool in the Tube chosen for the Queensland Symphony Orchestra's performance of a history of surf music.

In 2000, I set up with my collaborator, Annette Hughes, Stickylabel, an independent label producing music and spoken word works. During the early 2000s, I performed political spoken word and song as PROTEST SINGER and Stickylabel, with me on the console, produced and released Mohsen, the spoken word album of refugee poet, Mohsen Soltany. This strand of creative practice coexists with songwriting and composition, but instrument-making underpins all my work.

In 2004, we moved the studio to a farm on the Queensland Sunshine Coast, where there is time to concentrate on creative practice. Throughout my long musical career I have made custom instruments, but production increased after moving to the hinterland. Having a dedicated workshop, a reason to imagine and fashion machines to make new sounds, and a seeming endless source of raw materials, has greatly expanded my oeuvre.

Indeed, my duo, Datson Hughes formed around the instruments. Annette picked up my silky oak duclimer and began playing along with me on 'banjolina' and we started to rehearse and perform to showcase the instruments as much as the songs. Their distinctive sweet, twangling sound features on New Depression Songs, which released March 2009, and in 2010 on Then, and Then: a Memoir, which toured Sunshine Coast Libraries, showcasing my instruments to new audiences. We were invited to perform it at the Reality Bites, Gloucester and Byron Bay writers festvals and at a showcase at the Roxbury Hotel in Glebe in Sydney which further extended my reach to a cross-over audience that would not necssarily see such musical objects.

In 2013 we exhibited a joint work - my insturments and Annete's photographic images at the Soundmakers Symposium at the Cooroy butter factory, and performed as part of the event. This foregrounding of my instuments coincided with us moving towards recording when we engaged award winning porducer Kalju Tonuma to record a demo. Artistic direction of, recording and touring Datson Hughes has occupied the past 4 years years. We have released 3 singles so far and our Whispering Highway EP which toured nationally in early 2017. We applied for and recieved professional development funding to rehearse our forthcoming album with our producers and showcase in Melbourne. During that tour I exhibited in the Instrument Maker's paviion at my first National Folk Festival. We took the opportunity to play on the numerous blackboard stages during the festival to a passing crowd of thousands of people across the duration of the festival and in the programmed Maker's concert to a large seated and attentive crowd of close to 500 people.

Our debut album Flowers and the Axe (2018) is produced and pressed to vinyl and we are now touring it throughout QLD, NSW and ACT. The duo has just finished recording a second album on which, again, feature my instruments, specifically a new bass duclimer which I developed specifically to inject some bottom end into our sound. We are currently rehearsing our repertoire with the new instrumentation so the bass duclimer can be showcased at the 2018 National Folk Festival. ​

​Most recently I was one of 14 finalists in the 2017 ArtCycle People's Choice Prize at the Noosa Regional Gallery, and was successful in obtaining both Art sQ and Noosa Council RADF assistance to build a body of new work to take to the 2018 National Folk Festival. That instrument showcase is also included in Musswelbrook regional Gallery 'Bloom Room event, and the Gympie Regional Gallery studio trail in 2018.

My instruments featured in Datson Hughes performance of my new sound work BIRD SONG CYCLE in the Jervis Bay SeeChange festival in 2018.