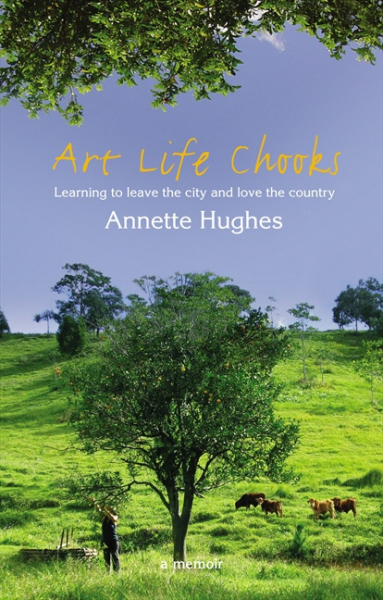 SKU:
A$50.00
A$50.00
Unavailable
per item
ISBN: 9780730443698
4th Estate PP 304
Includes a copy of the CD of the soundtrack to the book.
Signed limited edition
Buy Now
BLURB
I've left my friends, my career and my whole idea of self, for what? To live some half-baked hippy idyll? I'm going to be living in close proximity to the family I've barely seen since leaving home some thirty years ago, not to mention living with Geoffrey's family at very close quarters. What was I thinking?

As a literary agent, Annette Hughes lived a life of launch parties, deal-making and endless manuscripts. It was a job that seemed to follow naturally from her work with painters, sculptors, actors and musicians. But then she gave it all up and headed back to the state of her birth, Queensland, and a farm in the Noosa hinterland with her partner, Geoffrey. Now her life is digging the vegetable patch, watching the seasons, tending the chooks and animating a class of disinclined drama students at a local school. Some days she loses her voice. On others she may speak to no one or simply spend an hour or two communing with the cows or watching horrified as Geoffrey fights off pythons in the chook house. This is an engaging, fresh, opinionated, funny and surprising book about moving out of your comfort zone.

'To me Hughesy is the absolutely fabulous super agent I drank with in the swishest bars in the greatest city in the whole wide world. But that is not Hughesy as you know her. You know her better than I because you know her now as the chicken lady of the northern coast.' John Birmingham

'An absorbing read ... the subject matter and the writing are equally charming.' Australian Bookseller and Publisher

Only available with book purchase

The songs on this CD either inspired or are the subject of the book.  The book is available  online as an e-book.

1. Blue Guitar is from Annette's first album; prophetic of the move from the city to the country.

2. Bucolica also from that album and prophetic, written a year or two before the move after a holiday to the farm. The lyric appears in the text.

3. What Thou Art, also from that album, a song about returning to the heartland of home. Lines of this song are quoted in the book.

4. Ketaminefield is from Geoffrey's Then, and Then: a memoir - a poem about his mother and memory. The poem is printed in full at the back of the book.

5. Edwardian Echoes is an early song written prior to the beginning of the Iraq war about not wishing to have to send our children into history.

6. Mincemeat is more recent, from the Great Leader album, where the epigraph in the book comes from: "Always work with animals and children, it's more beautiful that way".

7. Poor Time is one of the songs "For Her Birthday" which appears in chapter 4.

8. Nocturne is an instrumental piece composed about the same time we went looking for Number One (a missing cow) in the moonlight.

9. Starlight is by both of us, and is described in chapter 5 of the book.

10. All Your Days is described in the book, at the end of chapter 11, a song we both worked on about the physics of a kiss.