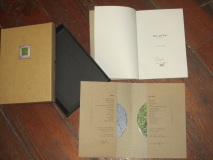 THEN, AND THEN: A MEMOIR

Buy Now
BLURB
Half a life time ago, Geoffrey Datson set out from the Sunshine Coast on the journey of the rest of his life.'I started writing poetry at sixteen and a few years later, was given an Appalachian Mountain dulcimer. About this time my parents bought a farm, the intention being that I’d help my father run it. Punk rock appeared. I sold the dulcimer to buy an electric guitar, fled the farm and headed to Sydney.' says Datson.
After a couple of decades in bands including a stint in NY and the slow acquisition of a studio, Datson's solo voice emerged. He performed and recorded spoken word as 'Protest Singer' in the early 2000s but in 2006 'on the burnout tail of one too many parties', he realised he was needed to help out on that family farm. 'A quarter of a century later' he find's himself full circle, back wearing his late father's boots, back where it all began.

Then and Then traces the artist's journey home, both physically and musically, from the Dulcimer, through rock, electronica and now back to hand made instruments. This is a major work for Datson; a collection of spoken word poetry and song from the past ten years, all of it recorded and only available in this limited edition.'The work is about a sense of place, belonging or not belonging. About loving where you are, or not. Without place these poems would be nowhere, they would have no place to be nor would they be needed.

REVIEWS:
Then, and Then is like field recordings from The Twilight Zone. If Alan Lomax took his Nagra to Alpha Centuri and pointed it back this is what he would hear; snatches of electronica colliding with folk music, pop melodies and Celtic droning dulcimer crashing against lines tinkled on a Casio. Floating on top of this strange brew are snatches of poetry.
Geoffrey Datson has had a diverse recording career to this point from the straight up pop rock of the Surfside 6 to the post-punk of Belle du Soir who recorded for the legendary MSquared label. In the mid 1980s he formed Samurai Trash whose Afrobeatish sides released by Virgin were widely acclaimed. Since then he has toiled in the basement and traveled widely, recording an eclectic range of projects, most recently as producer and musician on a powerful CD of poetry from Moshen, an Iranian refugee interred in Villawood.
Then, and Then is a record of Datson’s peripatetic travels in time and space from adolescence on a farm in Cooroy on the Sunshine Coast to Sydney and then around the world back to Sydney and finally back to Cooroy. It’s an album that starts with teenage dreams of Patti Smith and the symbolist poets and Neil Young and winds up back on the land. As a teenager he’s full of ideas and adventures. By the end of the journey, he’s coming to understand the acceptance of country that his father had. “Homeland Borderland Wasteland” is the most obviously political, while “Pied Plucker of Cooroy” the most whimsical.
This is not a linear narrative by any means. There’s snatches of ideas, nightmares and reminiscences and quotation; dreams and events. The music also has its own narrative that signposts Datson’s journey; songs like “Woodcut” sound like the Velvet Underground jamming with the Incredible String Band. There are other familiar sounds here too; Suicide, early Human League, the Grateful Dead, Arabic drones and plainsong. Sometimes all in the same song.
The album comes with a beautifully packaged book of poetry. The words on the page are satisfying enough, unlike most rock lyrics, but benefit from accompaniment. Given the breadth and diversity on these tracks, it’s amazing that it holds together but it somehow does. The doom-laden clouds part into delicate pop melodies. Like any collection of poetry, you can dip in and out, but listening to the story unfold is the way to do it. This is definitely not, as they might say in Star Trek, rock & roll as we know it. It will adjust your set.
Toby Creswell 2010

"I was amazed at the recitation and songs and you and Annette playing your hand-made instruments: it had that sense of time stopping, or maybe of another place where time runs at a more stately pace: and the whole room becomes a sounding board, resonating with the word.
"Dan McAloon ( Writer) 2011

"Reading this reminds me of walking into a sparsely furnished room.  It's definitely not cluttered and consequently every piece of furniture is there for a reason.  There is a lot of space in the poetry."
Sandy Herbert (Artist) 2011

"...your writing style is sometimes a series of haikus rather than linear storytelling."
Des Wade (Singer Songwriter, Adelaide) 2011